The Ways of Light unite those peoples who defend values such as order, justice and peace. They strive for an age of reason and prosperity by repelling the forces of Darkness. They respect the peoples of Destiny, even when the latter refuse to assist them. The kingdom of Alahan is the defender of virtue, justice and Light. Its army fights bravely every day against those who seek to enslave the inhabitants of Aarklash. Its people, the Barhans, have chosen the Lion as their emblem. On the battlefield, the Barhans are brave fighters, inspired by the feats of their ancestors. Their book of spells draws from the forces of the Elements and their knights, who are the dauntless heirs of tradition, never waver when they charge the enemy. 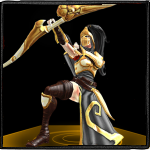 Born in Laverne, a northern barony of the Kingdom of Alahan, Silienne had to quickly leave these lands ravaged beyond all rehabilitation following the wars against the Ram.
By the time she reached the land of the Cynwäll, she was the sole survivor of her group.
The elves there present chose to raise her as their own.

Preferring the bow to the traditional crossbows of her guardians, Silienne quickly gained the respect of her elf companions thanks to her prowess with this weapon that they admired, but considered obsolete.

Following her rite of passage to adulthood, the Elves offered her a composite bow made of a supple, lightweight and durable alloy, "Heart Piercer", wrought by Heliasts to match Silienne's breathtaking abilities. Her experience in the forest of Allyvie makes her a solitary hunter able to track and hit her target from prodigious distances. 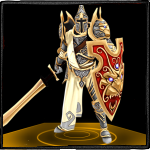 Arïnius the Proud is the descendant of a noble lineage of Knights. His many feats of arms came to the hearing of the royal court.
It is said that when he was offered a post within the prestigious Order of the Royal Guards, Arïnius would only have agreed on condition of being free to combat evil wherever he may choose.

His unmatched pride makes him a ruthless adversary that none has yet managed to defeat.
His sacred weapons make him a formidable fighter, be it in a duel or against a horde of enemies. 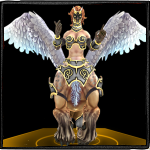 The Chimera is a mythological creature whose power is beyond imagination.

At the very origin of arcane magic, she is also the incarnation of Virtue.
All Barhan magic derives its power from the esoteric teachings of this prodigious immortal of the Light.